During Dead Week at the end of Doolie year I picked up some fireworks in Wyoming and brought them back to USAFA. Not just any fireworks, of course, but a good collection of skyrockets that go “bang”! Don Hoffman, who was my CS-07 roommate, and I put on fatigues and worked our way across the athletic fields from east to west, stopping occasionally to shoot a couple of these boomers into the night sky. We finished over by the obstacle course then entered the west stairwell of Vandenberg. Since our squadron had Command Post duty that night we headed there to see if anyone wanted a snack or something from Arnold Hall. Comm Post was deserted except for one of our classmates. He told us that the others were in the athletic fields with the Air Police looking for some guys shooting off fireworks. Fortunately, Don pulled back from his brush with delinquency and became the four-star commander of AFMC and the last person in our class to retire from active duty. 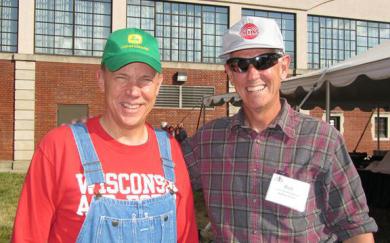 Photo of “farmer Don” and me the day before he retired.