by Joanne Huddleson, wife of (the late) Scott Huddleson

Scott and I met the day before my 16th birthday in September '69. Within a week my mom drove a VW bus-load of us teenagers down to the Billy Graham Crusade in Anaheim, California where Scott, upon hearing what Jesus offered in John 10:10 "I have come that they might have life and that they might have it more abundantly", knew he desperately wanted and needed that kind of life.  Scott walked down to receive God's free gift of salvation, found only in Jesus Christ. And he never looked back! Jesus became his reason for living, for life!

A few months later we started dating. When he left in June in '70 for the USAFA, a long distance dating relationship began with lots of ups and downs. In fact it would be another three years after he graduated from the Academy before we got married. Ten and a half months after finally getting married our daughter Stephanie was born, shortly followed by sons Alden, then Nate and finally Ethan, whom God gave us for 4 short hours. And therein the tough stuff of life really seemed to begin!

For the next 20+ years I chose to believe the lie that if I walked in close relationship with God, then He might test me and take Scott, just like He'd taken Ethan. Or, if I turned totally away from God, He would punish me and take Scott. In reality, when I turned away from God, I lost out on His gift of abundant life, unable to receive His love, His grace, His forgiveness, His healing. And thus I did not have the ability to then give His love, His grace or His forgiveness much less allow for His healing within our family! Holding onto anger and fear does not make one an easy person with whom to live.

In 2002, upon Scott's retirement from the Air Force after 28 year years of active duty, we signed up to head over to Baotou, China to teach conversational English to Chinese English teachers. And no, we don't speak Chinese--they had to speak English! During one of the afternoon sessions, one of his students broached the subject of "Do you believe in love at first sight?"  Scott told the students about how we met and our eventual falling in love.  But then Scott also told them that after a while, many relationships aren't so fun. When life gets tough, many jump ship, giving up. I was like that. Fight or flight. I reached that point of quitting, of giving up on us.  But Scott would always respond "You're welcome to leave. I'm not going to..." And so, only by God's grace, and by Scott relying on God's love and forgiveness, would we keep going.  Scott finally shared with these Chinese students that it reached the point where he had no love left.  He had no desire to keep hanging in there with me. So Scott made a commitment before God.  Scott chose to wake up each morning, and ask God to give him His love for me. Day after day, after day...

When we moved back to Colorado Springs after that first summer in China, God was finally able to begin breaking down the lies I'd lived with for so long, to start the healing process in my soul, my heart. The truth was that Jesus had walked with me in the loss of our son Ethan. God understood our loss as He too, knew ahead of time that His son would die. He got that! HIS love was enough. His grace and forgiveness were for me, too! I was finally able to learn to walk in the truths of Romans 8: 38, 39: "For I am convinced that neither death nor life, neither angels nor demons, neither the present nor the future, nor any powers, neither height nor depth, nor anything else in all creation, will be able to separate us from the love of God that is in Christ Jesus our Lord." Oh, Jesus, thank You for never giving up on me! You are enough!

In March of '07, Scott went to see a doctor at a local base clinic after not recovering from what he thought was food poisoning. We got a call before he'd made it home telling us he needed to head to the emergency room because he had "highly elevated liver enzymes". As we awaited the results of further testing, we thought it might be that his gall bladder needed to come out, as his dad and sister had both had theirs removed. When we heard the words pancreatic cancer come from the doctor's mouth, grief once again overwhelmed our souls. Oh Jesus, how could this be?? Scott was the one who strove to be healthy, be it exercise or what he took into his body. Two weeks later he underwent horrendous surgery to remove the dual duct blockage etc. As soon as he'd healed from that, he began an extremely tough regimen of chemo and radiation treatments.

God ended up blessing us with just over a year of life post-diagnosis. We learned to delight in waking up each morning with the gift of another day! And in that year never once was Satan able to say to me that God was being punitive. Some things just are. And then we got to see how God walked with us in the midst. Scott's faithfulness to His God, OUR God, to me, allowed GOD to heal our marriage long before that day in March. Like Scott's "A Thousand Decisions for a Thousand Days", his commitment to wake up faithful day after day after day, so I'm learning to live in the reality of Lamentations 3:22-26: "Because of the Lord’s great love we are not consumed, for His compassions--His mercies--never fail. They are new every morning; great is Your faithfulness. I say to myself, “The Lord is my portion; therefore I will wait for Him. The Lord is good to those whose hope is in Him, to the one who seeks Him; it is good to wait quietly for the salvation of the Lord." 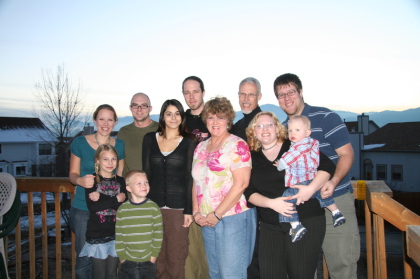