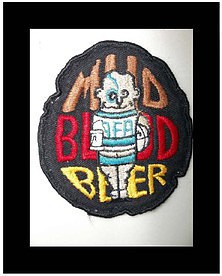 This is a photo of the patch that I wore proudly on my left breast during the 1973-1974 Rugby season. It is more than a patch, it is a symbol for all that has gone wrong in our society since 1974. When Tex left the Academy in 1975, the patch left with him. The new coach (and I am sure the Academy hierarchy), wanted to clean up the team’s image. In my mind, that was a mistake. That patch served as a reminder as to why Rugby is different from all other sports. It is the only sport where the teams socialize immediately after the game, share stories, and become friends, at least until you see them on the Pitch again. Playing Rugby without the craziness that followed, is like eating lettuce and calling it a Caesar Salad. It cannot be the same. In those days, I did not drink beer at all, but I could sure hold one and enjoy the party, sing the songs, and if called upon, be the Zulu Warrior. Taking the patch and cleaning up the image, was the first shot across the bow for Political correctness. It was the first step in a lifelong march to make warriors presentable to the rest of society. While we were being trained to kill for our country, we were always expected to march to the tune of Political Correctness.