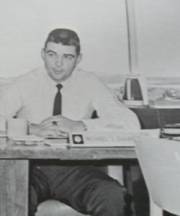 Major Dugan was one scary dude!  In his mind, he WAS the Air Force Academy.  He was feared, not just by Doolies, but by all the upperclassmen.  Hell, he was feared by his own peers!  His nickname was the “Brush”, derived from his immaculate crew cut.  He was all business and if he ever displayed a sense of humor, it was at someone’s expense.  He had a very distinctive speech pattern.  He talked in short, clipped sentences which only added to the fear factor.  I only had contact with him on a few occasions and I went out of my way to never have contact with him.  He must have liked me though, he rated me number 2 or 3 in the Military Order of Merit (MOM) in my 4th class squadron.

He told us a story one time about his experience in Vietnam.  He was an A1E pilot flying out of a base that was under heavy attack.  He was shot down three times-in one day!  The fight was so close to the base that he just walked back to the flight line and got in a new airplane.  I never did verify the story, but I wasn’t going to challenge him.

I still get chills down my back thinking of standing at attention while the “Brush” inspected my uniform or room.  He was frightening!

The only time I ran into him after my Doolie year was in 1986. He was a 2-Star General (O-8) and was the Chief of Operations for Tactical Air Command.  I was a Major (O-4), flying F-16’s at Shaw AFB in Sumter, SC.  Dugan was on an inspection tour of the base and was in the 33rd TFS Crew Room when I returned from a sortie.  When I walked into the room, he was on the other side of the room, 60 feet away, talking to other pilots.  He looked at me, and from across the room he said in his short, clipped cadence, “Ah Meeker, the last time I saw you, I was an O-4 and you were an O-0.  Now I’m an O-8 and you’re an O-4.  I guess that makes us even!”   I was shocked; I was too far away for him to read a name tag and it had been over 16 years since I had been in the same room with him.  I have never understood how important people can remember the names of every peon they meet.

In 1989, General Dugan was promoted to 4-Stars and made the Commander of USAFE.  A year later, he was made the Chief of Staff of the Air Force, the Number One man in the Air Force.  Desert Storm was building to a climax when Dugan told a press conference that the US was going to go after Saddam Hussein and his family and kill them.  Vice President Dick Cheney took exception to brashness and fired him, after only 79 days in the job.  It took another war and 15 years before his forecast became true. Although I feared him, I always admired him. 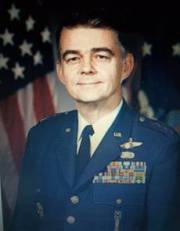