In the fall of 1962, I was 10 years old and in Mrs. Pruitt’s 5th Grade Class.  One afternoon we were having Career Day, and all of us took turns coming to the front of the class and telling all the other students what we wanted to do when we grew up.  Boys wanted to be firemen, policemen, doctors, lawyers, and loggers.  The girls wanted to be nurses, teachers and mommies.  When it was my turn to talk, I distinctly remember the only words that I said: “I am going to go to the Air Force Academy and fly jets!”

No one in the class had a clue what I was talking about, not even Mrs. Pruitt.  But I did.  Because my older sisters, Judy and Joan, had married Air Force enlisted men, I was intrigued by the Air Force.  Even at that early age, I knew that I wanted to be an officer and a pilot, not an enlisted man.  The first class graduated from the Academy in 1959, and for years I read everything that I could find about the place.  In the summer of 1962, I visited my sister, Joan, and her husband, Dick, at McClellan AFB, in Sacramento, California.  Although Dick did not work on the flight line, he managed to get me a tour of an F-104.  It was the world’s fastest plane, a rocket with tiny wings!  I was hooked and I spent the rest of my elementary and high school days preparing myself so that I could get an appointment to the Air Force Academy.

Bonners Ferry and Boundary County were not fertile breeding grounds for the Service academies. At that time, Bill Witt, BFHS Class of 1958, was the only graduate of a military academy-West Point.  No one before me from BFHS had even applied to the Air Force Academy. Since I graduated in 1974, I know of others; Bruce Pedey graduated in 1985, Nate Downey (son of Lonny Gentry, 69, and Vicky Meyers, 70) and Sally Smith in 1995.  She ended up being one of the top graduates in her class.

I started writing my Congressmen and Senators when I was in the 7th Grade and they became familiar with my name at a very early age.  Their staff’s always wrote back, telling me what I needed to do to be prepared when the time would finally come for me.  The competition was fierce, but at least on paper, I knew that I was very competitive for the one or two slots that were available every year.  I ended up getting multiple nominations and appointments to the Naval Academy, West Point, Air Force Academy and the Merchant Marine Academy.  The appointment for the Air Force Academy came first and paperwork was daunting!  Everything had to be type written, in 6 copies.  Mistakes were not allowed.  I owe a great deal of gratitude to Joanne Wombacher and my sister, Pat, for the hours of typing that they did for me.   I chose the Air Force Academy because I did not want to fill out any more paperwork.

As the time approached to leave for the Academy, I received a packet from them telling me what I needed to bring with me.  For some strange reason they wanted me to bring a pair of “broken-in” black, low quarter shoes.  I looked all over Bonners Ferry to no avail, and I finally found a pair in Sandpoint.  I spent the last few weeks of my last civilian summer wearing those ugly shoes everywhere, including wearing them on my daily run.  By the time I left, I had a nice crop of almost healed blisters on my heels. 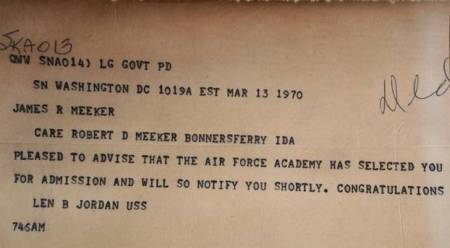 The only time I remember my Dad crying while I was growing up, was when this telegram came to the machine shop telling him that I was going to the Air Force Academy.  He was a very proud Papa!