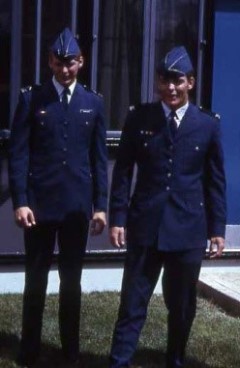 I am almost certain it was a Saturday morning, or it might have been a Friday afternoon, that Steve Hinchman and I decided to go hitchhiking or fly somewhere, space available, with the four or five days we had off. We had just finished our freshman academic year and we had a bit of complete freedom until Wednesday at 1915 hours when we had to report back in to our squadrons. (Steve came in with us, but left USAFA after his sophomore year.)

So, in our summer, short-sleeved blue shirts and carrying a small bag each, we hitchhiked down to Peterson Field. At base ops we discovered there was a plane flying to Los Angeles Air Station and we got on it. We were young and excited and thought a visit to my family would be an adventure. Before we knew it, we were in Los Angeles. I’m pretty sure it was only then that I decided to give my dad a surprise call and let him know we were coming by for a visit since we lived over in Riverside, CA by March AFB.

Pop was pretty excited to hear from me in Los Angeles as you can imagine.  He was an active duty Air Force officer, KC-135 pilot. After my having survived freshman year, he was probably just getting used to the idea of all the college tuition he really would be saving if I made it through the academy. I think he saw trouble and a shortened cadet career coming for both Steve and me when he heard of our hitchhiking vacation.  “No” he would not pick us up – he was working and had three of my siblings to look after. Not only that, but Pop hardly said ‘Hello’ and ‘Hey ain’t it great that you came to visit?’ When he finally began talking, it was about just how soon he could get us on a plane back to Colorado. After all, he had a lot of years as an enlisted and an officer in the military and he understood better than I how important the reporting instruction rules were.

So, Steve and I got down to the main highway toward Riverside and stuck our thumbs out. It wasn’t very long before a farmer in a truck with a bunch of chickens offered us a ride and we took it. After all, beggars can’t be choosers! This farmer got us close enough to Riverside, dropped us, and we were very grateful to be away from the smell of chicken poop. I’m sure there was a message there.

Between the time we called and the few hours it took to ride the chicken truck to Riverside, Pop had done our homework for us. There was a plane going out on Tuesday, to Ellsworth AFB, South Dakota. He made sure we were on it. In fact about this point in our adventure it was beginning to be very clear just how precarious it was going to be to get back by Wednesday.

Fortunately, come Tuesday we did get onto a tanker into Ellsworth. We hitched a ride into Rapid City from a lady and her kids heading home from the commissary, but who had stopped to drop something off for her husband in base ops. Nice people helped us out everywhere. I remember there were plenty of times as a cadet that people were unexpectedly generous and kind to me. Though I remember the kind people and the rides, I don’t remember which route we took back. The weather was comfortable and we almost never had trouble getting a ride being in uniform, although we were often asked which military we were in. Those uniforms still mean a lot today.

That Tuesday night we played cards until dawn at a well-lit, unused highway cloverleaf without a store in sight in any direction. The memory of that evening, the cloverleaf and the bugs circling in the yellow light has remained with me like a post card all these years. Wednesday morning we got our next ride….. a nice long one south from a fellow who was a car salesman. The second ride that day – early afternoon – was amazing, a fellow was going to Colorado Springs, riding in an antique car, and yes he would give us a ride though he had to drive slowly. He dropped us both at the base of the ramp at about 1900 and we were in our squadrons by 1915.