I thought that I was a pretty good wrestler until I stepped onto the mat for the first time with varsity collegiate wrestlers.  From the first few minutes, I knew that I was in way over my head.  Doug Cox could not have prepared me for the punishment that I received over the next few months.  I was like a brown belt Karate boy in with a bunch of black belt men.  I did not learn any wrestling skills in high school that allowed me to compete with these guys.  I very quickly became “cannon fodder” for the middle weight All-Americans and the heavyweight thugs.

Mike Sacrider was awesome to watch and painful to wrestle against.  We were the same weight and shared many of the same skills that allowed us to do well in BCT.  On the mat, he could have used me as a floor mop if he wanted to, but he never did.  I do not know why, maybe out of respect or friendship, he never humiliated me when we faced each other.  He always won, but he always made me look good in the coach’s eye.  I always respected him for that. 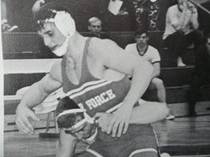 Mike Sacrider was a 4 year varsity wrestler for the Academy.  In high school, he was the Nebraska State Champion at 148 pounds.  In college he wrestled at 190 pounds.  He told Coach Kitt that he was not going to lose weight anymore to make a weight class like he did in high school.  I always admired him for that decision.

One of the main reasons for sticking with wrestling was to enjoy the benefit of the “Athletic Tables”. Freshmen on varsity teams did not have to march to the evening meal and they ate all their meals at that teams designated tables.  They were segregated off to the side of Mitchell Hall and had no interface with the rest of the Wing.  Doolies ate their meals like upper classmen-no rules. It was a tremendous relief to make the wrestling team and get away from the harassment at meal time.  When the season ended, Mike and I went back to the 17th Squadron tables. One evening, Mike and I were sitting at attention, enjoying our meal, when an upperclassman asked us about wrestling.  He was trying to find out who was tougher, Mike or me.  Before I could answer, Mike chimed in and told him that he and I were an even match, but that he usually came out on top.  Mike had a very calm, self-assurance about him and he never bragged about himself.

As a member of the team, I suffered a season ending ankle injury.  In November 1970, I was participating in team drills when the injury occurred.  Even though I weighed 182 pounds at the time, I was directed to join in with the heavyweights for take-down drills.  We formed two lines on opposite ends of the mat, and wrestled whoever came up next.  Since there were an odd number of us, we never faced the same wrestler twice. After going through the line a few times, I was paired against 255 pound Larry Dodge.  I had never wrestled against him before, and I grossly underestimated his speed, strength, and wrestling skill.  With lightning speed, he shot a single-leg-takedown on me.  My body was in a lunge position, with my right leg forward, bent at a 90 degree angle.  He had a hold on my right calf, with the full weight of his chest and body, on top of my knee.  With all of his might (and weight), he twisted his body to force me down to the mat.  When he did this, my entire body twisted, except for my foot which was firmly planted in the foam mat and did not move. 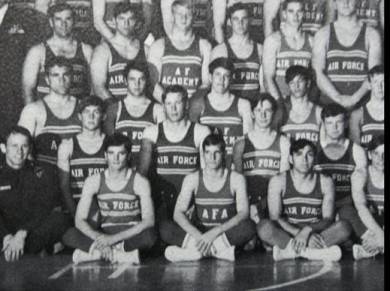 I was looking down at my foot at the time, and I saw my heel imbedded in the mat.  I thought about yelling out to him, but he was too fast.  As he twisted, I could feel the bones grinding together inside of my ankle joint, and I could hear my ankle make a loud “pop”.  This was the only time in my life that I have screamed.

I was taken to the dispensary to have my ankle x-rayed. There was no obvious breakage and I was told that I had a severe sprain.  After a few weeks with my ankle wrapped and using crutches, I was back on the mat, trying to wrestle.  I was still in pain, but I was trying to earn a wrestling spot for matches.  In late January 1971, a Colonel from the main hospital came into practice carrying a set of x-rays and sat down on a bench to talk to Head Coach Carl Kitt.  After a few minutes, Coach Kitt called me over.  As a 3rd tier freshman, I had never before spoken to the Coach and I was surprised that he knew who I was.  The Coach spoke to me saying “Son, you have been wrestling on a broken leg!”  The Colonel was the Base Hospital Commander and he made a special trip to check on me. He described the break as unusual, the ball joint had been ground into the socket, and now the end of the bone was dying.  And yes, I also had a severe sprain.  It was decided by the doctor and Coach that my wrestling season was over.

For the next 3 ½ years at the Academy, I walked with a noticeable limp.  I could never walk without a strong, tooth-ache like pain in my ankle.  I could run and exercise, as long as I stayed on my toes.  There was no pain with my ankle flexed.  On at least three occasions, my ankle “locked” as I was going down stairs, resulting in falls.  At the start of my senior year, I was advised to have my ankle fused in a permanent flex.  I declined.  My medical records use the term “osteochondral fracture right talus”.  It was not until February 2012, that I discovered what the term meant.

After my season was medically ended, I was allowed to stay on the “Wrestling tables” until the season ended.