Early In the morning on July 29, we boarded USAFA buses for the one hour ride south to the Academy. No one said a word.  I was really wondering what I had gotten myself into.  In those days, once you arrived and were processed in, you could not quit until Christmas.  That was one hell of a commitment to ask a bunch of teenagers to make.

In a scene right out of the movies, the bus wound up the road along the Parade Grounds, passed in front of Fairchild Hall, and stopped in front of the “Bring Me Men” sign.  We got out of the bus very slowly and with a lot of apprehension.  Our suitcases were piled up on the sidewalk as upperclassmen greeted us in a very polite and courteous manner.  We knew they would start yelling at us soon, but did not know when. 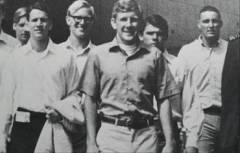 My classmate, Norm Seip, is shown walking from the bus to the processing area.  Norm would later be a Squadron Commander and then Wing Commander at Seymour Johnson AFB.  Norm retired in 2009 as a Lt. General and Commander of 12th Air Force in Tucson.

As soon as we got off the bus, we began in-processing.  First stop was the Barber Shop. What a great job to have-no thinking required.  We all got buzz-cuts!  By 1969, most high school kids had long hair.  I had always worn my hair very close to military standards, so it was quite comical to me to watch the others lose their golden locks. 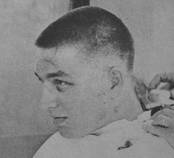 My classmate and fellow Squadron mate Rod Juno is shown at the USAFA Boutique, 29 June, 1970.

After the Barber Shop, we were issued all of our uniforms, bedding, and anything else that we would be required to use over the course of BCT.  Ironically, we were issued new low-quarter shoes.  We were introduced to our Element Leaders, the Cadet who would control our life for the next 3 weeks.  C1C Thomas Mahr was very nice to me and I thought that we might become great friends.

An hour or so later, I was in my room, trying to make my bed.  I had heard about hospital corners and bouncing a quarter off of the tight blanket, but I did not know how to do it, and I was not offered any instructions about it.  That was the trend on many things over the next year.  We would be told to do something that would be impossible to do or there would be no time to do it.  Sometimes both!  Our Class color was red.  That meant that our Blankets, bathrobe, and Contrails book were all red.  I later learned that the 4 classes of Cadets were easily identifiable by their color; red, silver, blue or yellow.  I did not have a roommate yet, so it was hard to figure these basics of Academy life out.

The Academy had a great public address (PA) system.  From the Cadet Command Post, everyone on the Academy grounds would hear an announcement at the same time.  I will never forget the first time that I heard one.  I was in my room by myself trying to make my first “tight” bed.  The announcement said “Attention in the Area, Attention in the Area”.  I did not know what to do, so I snapped to attention.  I had heels and toes together, stomach in, chest out, and chin in.  Only one problem, I was still under the bed and laying flat on my back!  After a few seconds, I was beginning to feel foolish.  Before I moved however, my new friend Tom Mahr walked into the room.  He thought the whole scene was quite humorous, and that was the first time that I had ever heard the phrase “sharp as a marble” and sadly, it applied to me.

One of the items issued to us was a little red book called Contrails.  In this book were all facts, figures, and knowledge that we were responsible for during our first year there.  Century series aircraft, famous quotations, and the phonetic alphabet were just a few of those items.  We would be responsible for their recitation upon demand by any upperclassman at any time until Hell Week was over (2nd or 3rd week the following May).  The usual place of this recantation was at every meal (while sitting at attention), and at the nightly shower formations (more on those later).

A few hours later, my roommate came into the room and introduced himself.  Tony Brozena and I were complete opposite personalities.  I was 18 years old, played many sports and tended to be uptight about all the events that would unfold over the course of the next 7 weeks.  Tony was 22 ½ years old (the maximum age allowed), was not very athletic, and he took all the military training with a grain of salt.  It wasn’t that he did not belong there, but I think his age and life experience allowed him to see the forest through the trees. He was a prior enlisted man who went to the Academy Prep school the year before. This was the third time through Basic Training for him and there wasn’t much that bothered him.

One of the most impressive buildings that I have ever seen is Mitchell Hall.  It is a huge aluminum and glass building covering 4 acres.  They serve over 4000 people their meals, all at the same time.  Our meals typically lasted 20- 30 minutes.   I still remember my first meal there, hamburgers. For a small-town Idaho boy who grew up with a constant diet of potatoes, meat, and green beans, the food was excellent. It was a nice place to relax and enjoy food that I was not used to eating.  I thought I would really like Mitchell Hall. But a few hours later, everything would change.

We were standing on the terrazzo in a very loose formation listening to a 1st Class Cadet Tom Mahr when it began without warning.  From behind, a large group of upperclassmen descended upon us like a pack of hungry, angry wolves.  They got in our face, chin to chin, and were screaming at us at the top of their lungs.  “Get your chin in, Mister!”  “What are you looking at, Smack?” “Get that stomach in, Dildo.”  Life as I knew it just changed with a very strong slap in the face.  There was no going back now.  Basic Training had begun. 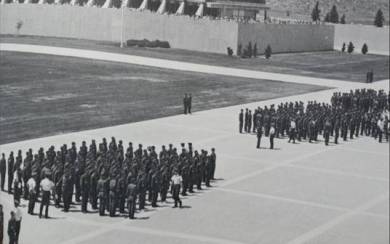 Above, “Hombre” Squadron is lined up waiting for the “Transition”.  Notice there are only four upperclassmen per Squadron.  On the Chapel wall, our upper class trainers were waiting for the signal to descend upon us.

The next three weeks were a blur. It was a constant flurry of marching, squaring corners, lectures, training, and more marching.  There was no sanctuary from the hazing/training.  We learned how to make square corner beds, spit-shine shoes and boots, and recite on demand any of the hundreds of facts contained in the little red Contrails book.

There are a few times in a person’s life that he should not be rushed or pressured; eating and bathing.  The Academy took great pleasure in denying both to Basic Cadets.  They took what had been very enjoyable times of life and turned them into nightmares.  Mitchell Hall was the worst.  For every meal, we marched in formation into the 9 doors of the chow hall.  We had only seconds to find our table and stand at attention behind our chairs.  When directed, we would all sit down in unison. We sat at attention, back straight, shoulders back, chin in, and eyes down.  You could only look up when spoken to by an upperclassman.  We had to eat by “squaring the corner” with our hand and arm.  In between bites, our hands were in our lap with our knife and fork resting on the plate at a 45 degree angle.  You had to try some of every food and you had to eat everything on your plate.  At any time, you could be called upon to recite knowledge, or be yelled at for some breach of Basic Cadet dining etiquette.  To say Mitchell Hall was a frightening place, would be a gross understatement—it was terrifying!  In all of my life, I have never felt pressure like the pressure I felt there.  Most “Smacks” took very little food, mainly because just the thought of going in there, killed your appetite.

Bathing too was turned into a nightmare.  Just when you thought the horribly stressful day was over, it was time for the Shower Formation.  Basic Cadets were lined up in the hallways of Vandenberg Hall just outside their rooms, wearing only white underwear shorts with clogs and carrying a towel.  We had to run in place, do lunges or jumping jacks, leg lifts and pushups, all the while upperclassmen were yelling chin to chin with us.  We were expected to recite the knowledge from the red Contrails book, even though the only time we had to even read it was after lights out at night.  Come to think of it, that probably was the only reason that we were issued flashlights.  The Shower Formation lasted about 15-20 minutes, just enough time to get a really good sweat going before bed and to get us emotionally fired up so that sleep would almost be impossible.  During the first period of BCT, Shower Formations were every night.

It is important to understand how we were organized during Basic Training.  There were just over 1400 Basic Cadets.  We were divided into 10 Squadrons of 140 Cadets.  I was in “H” Squadron, or “Hombres”.  The Squadron was divided into four Flights of about 35 each.  My Flight Commander was my new found “good friend” Tom Mahr, who knew how to take good care of me!  The Flights were broken into three Elements of 11-12 Basic Cadets.  We then all lived in our rooms with one or two roommates.  The point of this discussion is simple; even though there were a lot of us, we were completely isolated from our peers.  The only non-threatening conversation that I had for those first three weeks was with my roommate, Tony Brozena.  Outside of our rooms, we were not allowed to speak and we were required to keep our eyes down or keep them straight ahead, depending on the circumstance.  We were so isolated that I did not even know the names or faces of the other 11 Basics in my Element.

Since Tony had been through basic training twice before (Enlisted training and at the Academy Prep School), he was the “wise sage” for me.  At night, he would always keep me amused and helped me relax from the stressful days we encountered.  That is not to say that he was bullet proof, he would catch the same shit we all did and had the same fearful reaction that we all had.  However, when the doors closed and the lights went out, he had a sense of humor that made the day’s trials and tribulations seem not so bad.  Tony was a talented musician and he had a vast repertoire of silly songs and poems that always seemed to fit the occasion.  “Footprints on the Dashboard Upside Down” and “Hammer and Saw” will forever be emblazoned in my mind.  Stupid songs and poems, but they helped us keep our sanity.  For the rest of my life I have used Tony’s approach to stress and difficulty, no matter how difficult the situation.