By Mrs. Katherine (Katie) LaSaxon for my husband,

The time is summer of 1970, BCT for the entering Class of 1974. As part of that time, the Basic Cadet Orientation flight was in the T-33 Shooting Star. The ‘Stardust” flight was meant to serve as both a break in the action of basic cadet training as well as a morale booster for the incoming new cadets. Vic‘s first flight date was cancelled due to a mechanical issue. In preparation for the second attempt to fly, Vic was taken by his element leader to the cadet barber for a fresh buzz cut. This was odd since Vic’s previous buzz cut had just been just a few days before.

The BCT cadet element leader told the guys (including Vic) to be extra sharp in getting ready for the T-33 orientation flight. Indeed, the specific orders were something along the line of…”There will be no spatial disorientation ‘affects tolerated’ during cadet orientation flight:…” make your smack class proud…which means…i.e. “no airsick upchuck allowed”.  This sounded ominous at the time.

Vic and company showed at flight line to go meet the pilots who were already pre-flighting the T-33s. Vic was split-off and taken to what can be described as a hyper-clean T-33 with a big man standing at the wing and scrupulously checking the Maintenance Forms. As Vic approached, he instantly recognized the face, then the rank. “Oh…good…Lord…” Vic thought: it was Brigadier General Robin Olds, hero of World War II, Korea and Vietnam. Moreover, he was the current Academy Commandant!  Suddenly, the “no spatial orientation or getting sick” DVO from the element leader really hit home with him.

After a thorough safety brief and mission profile this August 3, 1970, they took off on an intense execution of just what this old war bird could do aerodynamically. Trying to sound composed and understanding the maneuvers and tactics explained…the General allowed Vic to actually fly some of the sortie. The flight went by fast. Before he knew it, Vic magically found himself on the ground being de-briefed with very kind and instructive comments from the General. General Olds took the time to explain how practice and discipline in these Basic Fighter Maneuvers could someday save Vic’s life in battle. He said that we fly for others, particularly your own squadron-mates, in combat and moreover to defend the country.

He dismissed Vic who then marched with dignity to the shack whereupon he found a secluded spot to shake off the still lingering effects of the flight. After he gained his composure, Vic looked out to the flight line and noticed another of his classmates ready to ‘do-it-all-again’ with General Olds. He could not make out who it was.

After BCT but sometime during first semester, Vic received the filled out log book page. The element leader had insured that Vic got the log book page signed by the ‘old man’ Robin Olds himself. When Vic made the Commandants List, he was certain that he would have a chance to thank General Olds for the 1st flight in the USAF but he never got the chance.

EPILOGUE: Many years later, after the USAFA Class of 1974 20th reunion experience Vic’s then teenagers urged him to begin collecting and organizing memorabilia from his Air Force career. The log book page from his first flight with General Olds was not suitable for framing at all due to the years and moves. We took a chance and wrote to then ‘retired’ BG Olds with the story and a heartfelt thanks for flying Vic in his 1st official USAF flight. We also included the beat up log book page. A short time later, we received a new page and a nice hand written note from the hero General.  It is framed to this day in our home in museum quality glass and preservation paper. 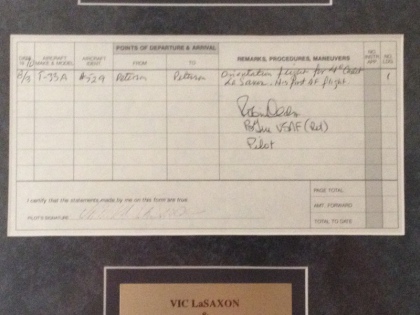