Anyone who has attended the Academy has many feelings about the experience -- some good, some bad. After graduation, as the years go by, we tend to mellow and see how the experience has put us on, I won't say a road, but a direction. The people we have met, experiences we have had and friends we have made make being an Academy alum what classmate, Bill Casement, rightly calls, the greatest fraternity in the world! Difficult for everyone upon arrival, it is more than the average college challenge. After we made it to graduation, we had been somewhat molded to head in a certain direction in life and to live that life, be it to serve a full military career or to branch into the civilian world, in a way that is different and, I believe, more enhanced than the average college direction. While at the Academy, the lifestyle we were required to lead, the grounding we were given and the opportunities we were offered have become so much more important as the years have gone by and we have experienced the real world.

I have to add that my Academy experience helped to form part of a foundation for our family life and the choices that our own three sons have made over the years. The boys attended academy sporting events (not just AFA), summer sports camps, Summer Seminars for prospective new class candidates (not just AFA) and two of the three chose to attend military academies. All three have chosen high standards and hard work -- a rigorous direction. I see the positive effects of my choice to attend an academy in the lives of my sons. And this is true in so many families where someone has had the opportunity to attend. An added bonus is the fraternal connection that we have and the opportunity to attend reunions and mentoring events. It is much more pleasurable to walk across the terrazzo and eat in Mitchell Hall now than it was in the early '70s! 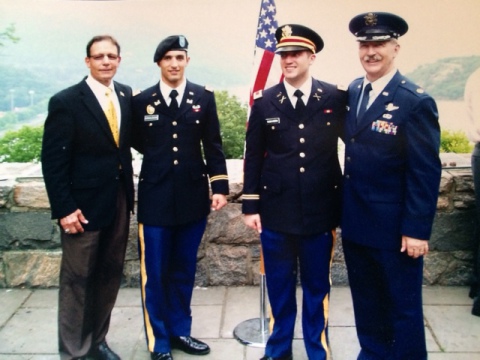 P.S.  Speaking of the greatest fraternity in the world, during our son's 2012 West Point graduation, at his traditional swearing-in ceremony (our son had chosen to have it done at Trophy Point overlooking the Hudson) who do we run into but classmate Bill Van Horn, whose son had also chosen to have his ceremony done there.