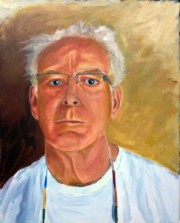 For my entire life I have been a creature of the Left Brain and every situation I ever faced and every problem I ever tried to solve I tried to address with my Left Brain. This was certainly true of all of my days at the Blue Zoo and my career. In fact, the military almost always demands and depends on the order controlled by the Left Brain.

My most significant event since graduation may be that I have discovered that I am, in fact, with age, learning to use my Right Brain. A year and a half ago I enrolled in a Bachelor of Fine Arts program at the University of the Incarnate Word in San Antonio, TX. Since that time, I have learned a lot about using the Right Brain to see life in a different way.

The best example of this change was clear to me in my Three Dimensional Design course. In the first assignment we were charged to use wire to create a three dimensional object.  My classmates (I have t-shirts older than most of them.) – made imaginary dragons and fairies in trees with wings while I made a bust and detailed the cerebral cortex, eyes, nerves and heart. It was an uncreative work…a product no doubt of my life long dependence on my Left Brain. The second assignment was to use two dimensional planes (foam board) to create a three dimensional object.  My classmates without much thought cut out organic and inorganic shapes, imagined the negative space, and constructed Getty Museum-like architecture or soaring, twisting DNA-like sculpture.  I recreated the Wright Flyer at Maxwell with Wilber in the front and an echo of earth for support. It was worse than bad.  It was my Left Brain past trying to dictate my future.

The last project was to make a wall hanging from found objects. I came in with a lot of left over PVC piping from my rainwater system. The professor was very nice, after all he is my son’s age, but he and I both knew this wasn’t going to be very good either. I have no idea why, but I brought in a large frame of wooden lattice work I had intended to fence off a part of the yard with, but longer needed. 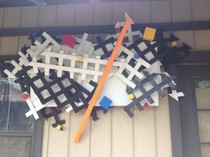 The professor looked more positive and said, “Okay, do not over think this. Do not begin with the end in mind.” I could feel Stephen Covey rolling over in his grave.

“Okay,” I said and took my skill saw and started cutting random pieces out of the lattice work. We laid them on a board.

“Well, look at that!”  He said. Sure enough, it had a feel of wholeness to it that was not of my intentional making.  Somehow the project developed a life of its own and found form from some other part of me. Right Brain

“Look at the whole piece. What feels right? Pay attention to details.” These are the concepts of the Right Brain for sculpture. It almost hurts to put them to use – like really learning how to do blind contour drawing. How very different from what I have done before. But exciting! A new world! Who knows where this will end?